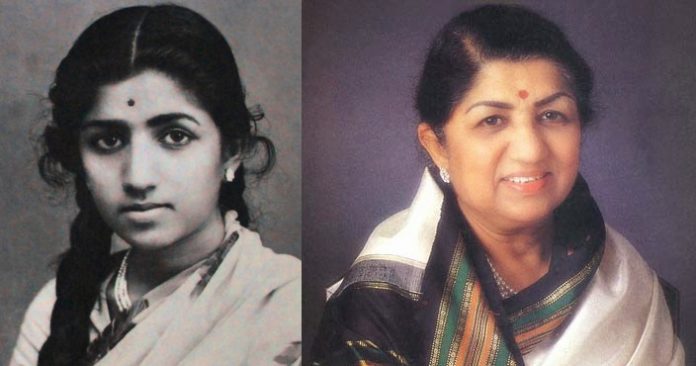 Fondly termed as Didi, queen of melody and the Nightingale of India, she rules a million hearts. She is everyone’s favorite, be it anyone from the ’80s ’90s or a millennial. She has given us many memorable songs that we will always cherish. Let us take a look at this amazing journey from her childhood to being a successful singing sensation by revealing some lesser-known facts about her.

1- She was born as Hema, “Lata” is inspired by “Latika”, a popular character from her father’s play “Bhaaw Bandhan”. Her surname is after a village- Mangeshi from goa.

2-  At the age of 5, she started acting in her father’s musical play- Sangeet Natak in Marathi.

3- She attended school only for a day, and later dedicated her life to music.

4- She was trained in Indian vocal classical under Ustad Amanat Ali Khan from the Bhendibazaar Gharana.

5- Sashadhar Mukherjee who was making a film Shaheed (1948) dismissed her voice as “too thin”.

6- Lata Mangeshkar revealed in an interview that her true godfather was Ghulam Haidar who trusted her talent.

7- During her initial singing career, she used to imitate the acclaimed singer Noor Jehan.

8- After the song- Aayega Aanewala from the movie Mahal in 1949, Lata Mangeshkar became a star singer overnight.

9- Earlier there was no category for best playback singer in the Filmfare awards and after her protest, it was included in 1958.

10- From 1958-1966, she monopolized Filmfare awards for the best female playback singer and it was stopped in 1969 only when she gave up the awards to promote fresh talents.

11- Her first National award came for the songs in the movie- Parichay.

12- Lata Mangeshkar holds the record for the oldest (age 61) National film award winner for the best female playback singer for the songs in the movie- Lekin (1990).

13- Once she was given a slow poison by an unidentified person for which she was bed-ridden for almost 3 months.

14- When she sang the song- Aye Mere Watan Ke Logon on 26 January 1963, it brought tears to the then Prime Minister of India- Jawaharlal Nehru.

15– She sang her debut song in the Marathi language- Natali Chaitraachi Navalaai in the same year for the Marathi film- Pahili Mangalaa gaur.

16– She is the only playback singer after M.S Subbulakshmi to be awarded India’s highest Civilian Award- Bharat Ratna.

17- In an interview, she revealed her two unfulfilled desires – singing for Dilip Kumar & Meeting her favorite singer K.L Saigal.

19- She is the first Indian singer to perform at the Royal Alber Hall, London in 1974.

21- In an interview in 2015, Lata revealed that her favorite Co-Singer from across era was Kishore Kumar.

22- She has given music for every major celebrity, representing each generation of hindi cinema from Waheeda Rehman and Nargis to Madhuri Dixit and Preity Zinta.

23- Lata Mangeshkar sister Asha Bhosle says, the song ae mere watan ke logon was meant to be her song. Composer C Ramachandra wanted it to be a duet with the two sisters while Ashaji wanted it as a solo.

sexual harassment of women at workplace.

COACHELLA: THE FESTIVAL OF MUSIC

Game Of Thrones- The Long Night