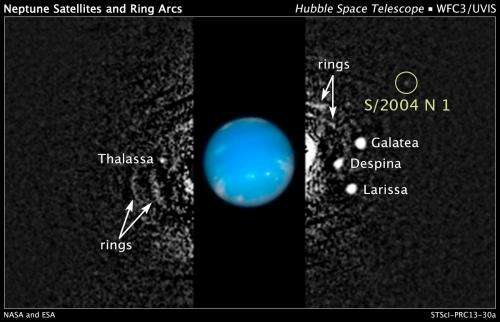 NASA astronomers in jet propulsion laboratory California discovered something weird two moons of Neptune which actually have a total of 14 moons they all dance together around the orbit of the planet.

While after doing a lot of calculation a conclusion was introduced the “if we observe Naiad from Thalassa that innermost moon will be following a special pattern which is actually very common.

To humankind and that pattern is zig-zag pattern as it passes by because of it’s tilted orbit.

Naiad is quite faster then Thalassa as it overtakes the slower Thalassa by four laps.  As both orbits are only 1,850 km apart, they never came this close to each other as they are 3,540 km apart even when crossing each other’s path. the two partners are locked in a “dance of avoidance” which kept their orbits stable by not getting them close enough to collapse.

Hubble Space Telescope was also used by researchers to get a look inside the properties of Neptune’s moons. As researchers were finally able to calculate mass and density which was quite similar to that of water ice.

THE ART OF DETACHMENT